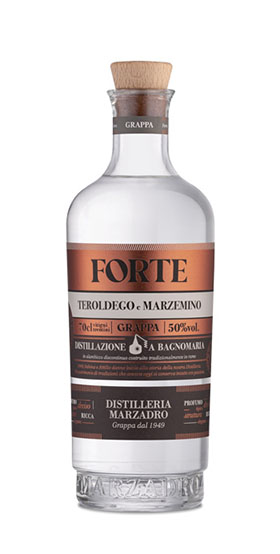 Grappa obtained from two native red grape varieties from Trentino, Teroldego and Marzemino. The distillation takes place slowly with the bain-marie method in a discontinuous steam alembic still, which preserves all the aromatic substances of the vines, guaranteeing the maximum result in terms of aromas and fragrances. The Teroldego marc is derived from grapes grown in the Piana Rotaliana,an area well suited to the production of this native variety. The Marzemino marc comes from grapes grown in the hilly and sub-hilly areas of Vallagarina (southern Trentino), on the right bank of the Adigeriver, between the municipalities of Nomi, Mori and Isera, a habitat par excellence for this typical vine. By skilfully combining these two varieties we obtain "Forte", a Grappa with a strong aroma and a rich structure that is extremely persistent, robust and enveloping.